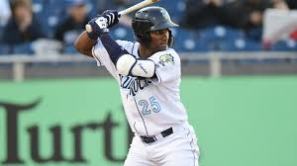 Welcome to this week’s edition of the Blue Rock report.

The Blue Rocks returned home to face Potomac in what was expected to be a 3 game set. However, they got two unexpected days off on Sunday and Monday as a result of the rainy weather. It was hopeful to think that this would aid in resetting the lagging offense. Unfortunately, were only able to muster up 2 runs on 6 hits in both games of the doubleheader on Tuesday against Frederick. The bats finally woke up in the final game of the series, and shelling Orioles top prospect DL Hall.

Here is the game by game recap from this past week:

As always, there were a few good candidates for this one, but the most deserving….

Brady Singer on 5/16/19: (6 IP, 6 H, 0 BB, 10 K): By far his best professional start to date, an absolutely incredible performance for so many reasons. With plus command, it’s a little surprising how few bats he has been missing this season, especially with his off-speed pitches. That changed on Thursday night; sending Frederick batters packing with his sliders and fastballs off the plate. Up against DL Hall, a power pitcher whose fastball consistently touches 96-97; Singer looked extremely comfortable with his pitch selection to work good at-bats. Singer did find himself in the middle of two tough innings, he kept control of his pitches to avoid big innings—working a groundout and strikeout, respectively.

I’m going to give it to the new guy, Colby Schultz. I wouldn’t necessarily say he is “a hot hitter”, but he provided most of the hits in those low scoring mid-week games. A prototypical leadoff hitter, Schultz did exactly what the Rocks need—get on base. He looked comfortable hitting off-speed and even pitches off the plate. As an added bonus, he has above average speed, and with some work can be a great base stealer. He did strike out three times on Thursday, which was disappointing—but hopefully only a minor bump in the road for his good start.

Schultz was signed by the Royals after going undrafted last year. He broke out his senior year at UC Riverside, slashing .311/.378/.437. He is listed as a second baseman, but it seems he will be filling the hole at 3B after Angelo Castellano was called up.

Nick Pratto, who has been in a horrible offensive slump, showed some signs of life in the last two games of the series. He had the lone RBI in Wednesday’s win; a line drive right through the shift into left. Thursday’s moment was a hard hit RBI single into the right-centerfield gap after a missed strike call—which led DL Hall to lose his cool and get ejected. He has been almost production-less the past month, and has run up a 36% strikeout rate this season. Looking at the games in this weeks report (the last 6), his strikeout rate is only 23.8%. He is seeing the ball much better, and making decent contact on most of his outs. A small sample size, sure, but an indication that there is work being done on his plate discipline and vision.

MJ Melendez’s Plate Vision Honestly, this argument could be made for most of the hitters so far this season. But Melendez sticks out to me because of how easy a target he is for opposing pitchers. The scouting report writes itself, and they must know that they can get him with the outside breaking balls and shoulder-high fastballs every single time. He has a great eye for the outside fastball, and will hold off 9 times out of 10—even in high counts. He has managed a 40% strikeout rate this year—and counting. Melendez has close to elite level raw power, and a really quick bat speed. His homerun on Tuesday night was 108mph off the bat. For what it is worth, a handful of his flyouts at home would be in the seats at other parks—and when he makes contact it is usually pretty solid. I strongly believe he is a few small tweaks away from tearing up the Carolina League; with most these tweaks coming in how he sees the ball. His swings all look very healthy, and if he made contact with half these middle-of-the-plate pitches he misses on, we would all be looking at a 50-55 future value player. His arm and instincts are incredible, and his defensive abilities are well polished. He is even quoted as saying how important defense is for a catcher’s game. I do not mean to take away from his game at all, and strongly feel he is very close to making a breakthrough. However, there needs to be some change in the water before he can hit better pitching.

Thats all for this time, check back next week!