(This is the third and final part of a three-part series of articles, chronicling Chase Vallot‘s history in the Kansas City Royals organization. In this article, we take a look at Vallot’s 2019 performance, his struggles in 2018, how he worked through them, and his outlook on the game, in general.)

With 75 games under his belt in 2019, Vallot is very much the hitter he has always shown himself to be: 24 of his 45 hits have gone for extra bases. Perhaps every bit as concerning as the strikeouts is his terribly-low walk total. Even when he struck out 151 times in 353 plate appearances in 2018 between Wilmington and Idaho Falls, he still walked enough (45) to boost his OBP up to .320, 136 points higher than his .184 batting average, and his .713 OPS was somewhat redemptive.

While he played at Low-A in 2015 and 2016, he is still only 22 years old now, and thus only 0.5 years older than the average batter at this level. Hindsight being what it is, perhaps the Royals promoted him too aggressively; he was only eighteen in his first season with the Legends, and twenty when he first appeared in Wilmington, 3.6 and 2.6 years younger than the average batter, respectively, at those levels, and catchers often take longer to develop. On the other hand, when you’re the 40th-overall pick in the draft, an aggressive promotion is certainly not uncommon.

The strikeouts continued to plague him, even though he had obviously made adjustments from at-bat to at-bat, as well as in the middle of plate appearances. He had clearly worked hard on pitch recognition and adjusting his swing, based on expectations depending on the count. More often than before, Vallot showed a willingness to shorten his swing in two-strike counts. Even so, his change in approach has yet to show statistical results. 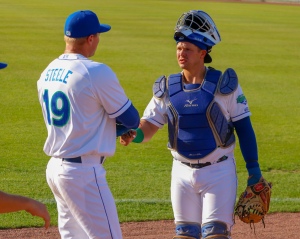 It’s awfully easy for those with an outside point of view can draw conclusions as to how a player handles adversity. Whatever has been going through his mind, this year, Vallot won’t ever let on that he’s been worried or depressed. He continues to insist that he’s just taking things one game at a time, trying to remain even-keeled regardless of his performance. The Chase Vallot of 2015 appeared much the same, and while he’s five years older now (he turns 23 on August 21st), he seemed just as level-headed at age eighteen as he does now. It’s a long season, and getting too up or too down is ultimately self-defeating.

All the analysis in the world doesn’t change the reality of the situation: Vallot is in his sixth year as a pro, and is eligible for the Rule 5 Draft, this year. In order to retain him, the Royals will have to re-sign him to a minor-league contract, assuming he isn’t selected in the Draft (see Alex Duvall’s Rule 5 Draft/40-Man Roster Google Docs post from April 30th). As things stand now, it’s unlikely that he’ll be selected, as it would require that he be placed on the selecting team’s 25-man roster and thus would be in the big leagues for at least ninety days. If selected, then waived, he could potentially return to the Royals, or would be sent to the selecting team’s minor leagues if he clears waivers. He may be released, altogether.

Once again, the power potential, as well as the current game-time power he’s demonstrated, is tantalizing. Sometimes, a player will have an unpredictable breakthrough or some sort of sudden epiphany, and then it all comes together. If that were to happen with Vallot, he would be quite an addition for any organization. But it seems, at the moment, to be a fairly big “if”.

So how does a player like Vallot handle this sort of adversity? How does he deal with the questions and concerns, the ever-declining stats, and a third go-round in Low-A, after playing 136 games in High-A?

Very well, as it turns out. But it didn’t start that way.

“The very first game of the (2018) season, I went 0-4 with four strikeouts,” Vallot recalled. “I guess that kind of set the tone for the season. I kind of got off to a mentally bad start. And one thing just kept leading to another. No matter how much work I put in, how much time I spent in the cage, all of that stuff…it just felt like I kept reverting to falling into that mental trap.”

Having come off of a difficult year, previously, Vallot said that his faith helped to keep him in a positive frame of mind.

“I’m a firm believer in God and Jesus,” Vallot said. “I really think that I’m going through this for a reason. Whatever that reason is, I’ll probably never figure out. But I know there’s a bigger meaning behind the struggle from last year (2018), so as of right now, my mental state is unbelievable.”

He also mentioned how his faith has helped him keep things in their proper perspective. 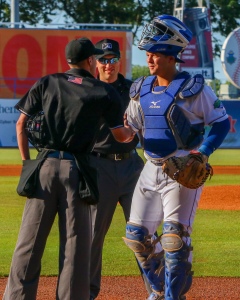 Vallot with his usual pre-game greeting to the umpires; June 25, 2019

“I just feel as if I’m in a much better place, right now. Basically, I kind of have that attitude that it’s just a game. I try always to have fun, no matter what happens.”

Vallot is quick to credit hitting coach Leon Roberts (roving minor-league hitting instructor) for improving his approach at the plate, and helping him to adjust better to off-speed offerings.

“One of the things that helped a lot, last year was that I went and worked with (Roberts), and it was just like a new world opening for me, from a mental standpoint, as far as hitting. This whole time, I thought there was something wrong with my swing, mechanically, but it’s just all between my ears. I learned how to have little victories.”

“We’re not going to be perfect in this game. We’re not going to bat .500 or 1.000. The great ones bat .300. So if you square up for the ball—even if you go 0-4—if you hit the ball hard, that’s your job. You can’t control anything after the ball is hit. That’s where I’m at, right now: put together four good at-bats, per night. Whatever happens, I take it.”

“It was definitely tough. It almost broke me. But it didn’t. So after dealing with that, I feel like I can handle anything.”

“I just feel like I have a different pizzazz now. Like, how I feel and act after the game, or when I leave the field. I don’t let that affect me.”

Having endured such a long struggle, offensively, Vallot has returned to the game with a different outlook. He was able to work on more than just the mechanical aspects of hitting, as well, during his absence from the field. 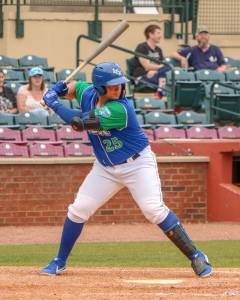 “I was able to work with the Royals’ mental coach, and it’s basically along the lines of the hitting coach’s work,” Vallot added, comparing the mental aspect of the approach to hitting to the physical, and how they compliment one another.

His final comment was an affirmation. Vallot has overcome a great deal, and has struggles ahead of him, but he concluded his thoughts:

The Legends end their regular season on September 4th. They’ll face off against the second-half champs in the playoffs, beginning two days later. The off-season may hold new challenges, and, perhaps, a new organization and new teammates, come 2019. But whatever his future holds, Vallot has grown to be significantly more prepared for those challenges.

And whatever happens, it seems that he’ll be ready for it.