(This is Part Two of a three-part series on former Top-30 Royals prospect Chase Vallot, documenting his time with the Wilmington Blue Rocks and his 2019 return to the Lexington Legends.)

When Vallot advanced to Wilmington for 2017, he continued to follow his familiar pattern at the plate: lots of strikeouts (127), but an .818 OPS made that a bit easier to set aside. He still swung and missed, frequently, but the power continued to hint that there was at least a chance for greater things to come. More injuries robbed him of much-needed experience, costing him two months’ playing time. He did get into 89 games in 2017, and finished with a .231/.380/.438 slash line, hitting 12 homers in 281 at-bats. That home-run total would be good for second on the team, even so.

The 2018 season, back in Wilmington for a second go-round, was an unmitigated disaster. In 47 games with the Blue Rocks, Vallot tallied a 43.2% strikeout rate. His 16.8% walk rate helped to salvage what would have been much worse than a .281 OBP, and his .145 BABIP seemed almost supernaturally low. Vallot’s last game with Wilmington would come on June 28th; the next time he stepped onto the field, it would be with Idaho Falls in the Pioneer League. He was coming off a ten-game cold streak in which he struck out 29 times in 37 plate appearances (30 AB). In that same stint, he had two hits. Two. Fittingly, they were both doubles.

what some players term the “phantom DL.” Such an assigned player may find himself sent to an extended Spring Training facility, for example, to work on certain aspects of their game. In Vallot’s case, he would be spending the majority of his time as an MIA active player with the Northwest Arkansas Naturals’ hitting coach, (now a senior hitting advisor for Kansas City) Leon Roberts, in an attempt to correct marked deficiencies in his swing. Roberts spent eleven years in the major leagues, batting .267 over 2,737 at-bats, though it would later be discovered that he had played his entire professional career with diminished sight in his right eye due to a childhood injury, as well as difficulty focusing with his left eye.

While Vallot was battling through his own struggles, the 2018 version of the Lexington Legends were building on what would become their first championship since 2001, their inaugural season. An important part of last year’s roster was the catcher tandem of M.J. Melendez and Sebastian Rivero, who both impressed with the bat as well as the glove. 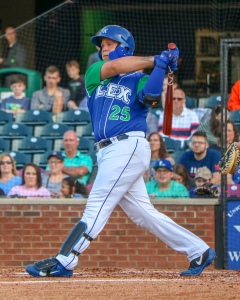 The squeeze was on for Vallot. Both Melendez and Rivero had earned a promotion to Wilmington, and former Legends Meibrys Viloria and Xavier Fernandez were heading to Class-AA Northwest Arkansas in the Texas League. Therefore, Vallot had nowhere to go but back to Lexington, and the Royals’ front office knew they needed to give him a chance to work out his difficulties at the plate.

Back with the Legends for the first time since 2016, Vallot was one of three catchers on the roster. Though he is working on his sixth season in the minors, he did begin the season as the youngest catcher among the three.

The new season had just begun, and this year’s version of Vallot had a different look about him as the season began. He’s now a couple of years older and wiser, and the weight of current offensive struggles and past injuries seemingly had given him a different outlook on his job. It is a job at this level, after all. As a teen-aged prospect making his debut with the Legends back in 2015, Vallot was rarely seen without a smile on his face. He would routinely start each game with a firm handshake and a smile for the umpires, a great way for any catcher to start a game, but that just seemed to be Vallot’s nature. He always seemed loose and relaxed, like he enjoyed every moment of the experience. He built a reputation as a mature young man, a great clubhouse presence, and a future team leader.

It’s three years later, and neither he nor the team to which he returned are the same as they were. And while he’s still quite serious about his responsibilities, still greets the umps with a firm handshake, and is still a great clubhouse presence, he is also a man bearing a heavy weight on his shoulders. From an outside perspective, at least, he often appears as if he’s got a lot on his mind. But make no mistake: he hasn’t lost any of his well-established professionalism, either.

(Part Three looks at Vallot’s 2019 season, his ups and downs, how his approach has changed, and his personal thoughts about the season and the struggles he has faced.)

3 thoughts on “Amid Struggles, Vallot Continues to Push Forward-Part Two”