(This is Part One of a three-part series taking a look at former Top-30 Royals prospect Chase Vallot, his first few years as a pro, and his attempt to advance once more above Low-A Lexington.)

Chase Vallot is a young man on a mission. It goes without saying.

The St. Thomas More product and 2014 1st-round pick (40th overall) by the Kansas City Royals is now playing in his sixth year as a pro. Much of it has been an uphill battle for the now 22-year old catcher.

Long regarded as a prospect with tremendous power, something of a rarity among catchers, it hasn’t quite come together for him yet. There have certainly been flashes: when he first arrived in Lexington in 2015, his 29 extra-base hits in 80 games seemed like a sign of what was to come. The next season, he popped 20 doubles and 13 home runs in only 82 games, and it seemed that our hopes were being validated. One of his homers actually put a hole in the front of the video board in the left-field alley, adding to his reputation as a power bat which had only begun to translate into game-time production.

Vallot was selected to the South Atlantic League All-Star Game in 2016, along with LHP Emilio Ogando. Adding to the significance of the selection was the fact that Lexington would be hosting the game, that year. At the time of his selection, he was tied for third in the league in home runs, and fourth in slugging percentage. He was also on the DL after taking a hard fall during a throw to the plate in a game against Greensboro on June 1st.

He was just returning to the lineup when, on June 14th, an errant 93-MPH fastball from West Virginia’s Gage Hinsz led to the emergency room and orthodontic surgery for Vallot.

It was the bottom of the third inning, in the second game of a three-game series for the Power at Lexington. When it was over, West Virginia and Lexington had totaled nine hit batsmen, between them. It was a rainy night, and it was just getting heavier when Hinsz let fly with an inside fastball. It looked like he was coming up and in, anyway, but not that far. Amazingly, Vallot went down only for a second or two and popped right back up, obviously in extreme pain. Trainer Mark Keiser and manager Omar Ramirez rushed out to him, with Keiser holding a towel over Chase’s mouth to stop the bleeding.

Vallot slammed his helmet down in obvious anger and frustration as he passed the dugout, walking toward the clubhouse under his own power. It was only when he was a little less than halfway there that his knees started to buckle, and he clearly would have fallen had assistance not been close by. He was helped the rest of the way, each arm around the shoulder of a Lexington teammate, weaker but still on his feet. Every fan present seemed to be holding their breath.

Vallot was rushed to University of Kentucky Hospital’s emergency room, where doctors assessed his condition and took x-rays. Vallot said that he didn’t even remember getting hit; that he simply blacked out for a brief moment.

Getting back to one’s feet is pretty impressive after taking a fastball to the face. Most of us would just wait for someone to carry us off the field, as we prayed for the shock to wear off. But perhaps just as impressive as his quick recovery on the field were the multiple selfies taken later that evening by Vallot as his friends and family visited him; he was smiling. The threat of serious, perhaps career-ending injury had stared him down, only hours prior, and Vallot never blinked.

Amazingly, there were no facial fractures. He did end up with a laceration that went clear through the left side of his upper lip which took a combination of 30 internal and external stitches. He also had to have several root canals. He was off the field for about a month. The emotional strain of being separated from the game he loved so much made it far more difficult. This doesn’t necessarily go without saying; not every player will tell you that they love the game with the same devotion as Vallot.

Far more tragic was the passing of his grandmother, Cathy Vallot, barely a week after the end of the season. Chase had put a serious injury behind him, only weeks prior. He was understandably shaken; she was only 61 years old, certainly far too young to pass away, and a tremendous shock to the family. She and Chase were close, and he felt her loss acutely. A photo of Chase and Cathy with his aunt Betty still greets visitors to his Facebook page. 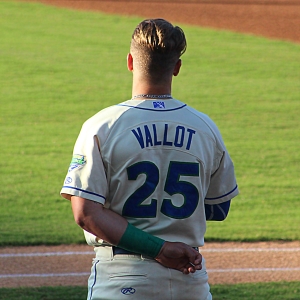 more to come from this young man. However, he hadn’t had an easy go of it health-wise, and all the while there were strikeouts piling up by the bushel when he was on the field. In his 162 games at Lexington between 2015 and 2016, he had struck out 223 times. On the other hand, when he did hit the ball, it went a long, long way. There were times when he struggled with most anything that was off-speed. He still hadn’t had a chance to play a full season, though, and time was on his side…….

4 thoughts on “Amid struggles, Vallot continues to push forward: Part One”