Nick Heath has been on an absolute tear over the last couple of months. The Royals 32nd ranked prospect has always been something of a wildcard offensively. He’s probably going to get a look in the big leagues at some point because he can absolutely fly and plays electric defense in the outfield. His role on a big league team was always up in the air due to his offensive questions, but Heath seems to be curbing some of those questions of late. 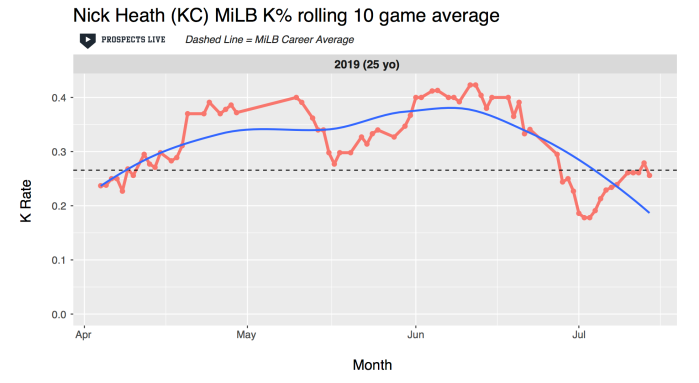 I asked Nick about his sudden turn around offensively, and what he thought might be contributing to his success this season. Here was our full interview:

Q: You’re hitting for significantly more power this year than at any point in your MiLB career. Is there anything you can attribute to that?

Nick: “It’s really funny the power part is brought up. I’ve always been taught from a young age to hit down on the ball because I could run. So my legs were doing a lot of the work and sometimes I might sneak one over or meet the ball at the perfect moment. But lately I’ve really worked with our hitting coach and more so mentally reminding myself to be as flat as I can through the zone which I really haven’t been before. I definitely think that’s been turning the balls that I might hit to the warning track into balls that finally start clearing the wall. Balls that aren’t hit as hard have been turned into balls that’s I didn’t really know I was capable of hitting. Always telling myself to keep my barrel in the zone as long as I can has helped me in ways I never thought it would.”

Q: You’ve always struck out a bit, but you’ve really cut down on the K% over the last month (down 10%). Have you made any conscious changes to your approach to cut down on K’s?

Nick: “The Ks going down has been something that’s been bugging me a lot. I think at the beginning of the year I was so concerned about not striking out that I was striking out at a rate that I’m sure everybody was uncomfortable with. More so lately it’s been about being more aggressive with that flattened swing on pitches early in the count. I’m not taking the fastballs away anymore and starting off in a pitchers count. I’m spitting on anything that isn’t a fastball unless it’s hanging or in the middle of the dish and I think it’s been helping me see the ball deeper and helping my plate vision and even my coverage. My biggest adjustment has been mentally walking into the batters box’s saying “(Screw) this, you’re not going to throw me a pitch in the strike zone that I won’t get my best swing off on.” Being more aggressive early in the count has really turned my at-bats around for me.”

Q: You’ve been especially brilliant at the plate over the last month, but have seen general improvements since the beginning of June. Has anything changed for you offensively? Just seeing the ball well?

Nick: “Again my biggest adjustment has been me not taking good pitches to hit. Even if I miss them I think I set my tone for the at bat and for the day. I’ve stood up a little more and let my bat relax on my shoulders so I’m not so tense and locked in before the pitcher has even gotten a sign. I think relaxing more has totally gotten me feeling more comfortable, not getting so stiff before the pitcher moves and me starting my load when he starts to come to the plate has gotten my timing really synced up.”

Q: You’ve logged more innings in CF this year than in any other year in your MiLB career. Do you feel like your defense has taken a step forward?

Nick: “I think me being in center more has definitely opened me up to being a little more consistent with how I’m playing the position. My biggest thing has always been reps especially with the two seasons I spent injured at some point or another. But getting to play out there just makes it feel even more like it’s where I personally think I’m meant to be. You always hear about being good at premium positions as a player or having to know how to play multiple spots but I definitely think playing as much as I have this season it’s got me locked in to play anywhere. I think I’m a little less reckless defensively than I used to be. Diving for balls in any situation or trying to throw guys out all the time. And now I think a bit more about when is right and when is wrong and it’s definitely helped me. Maybe diving now to catch this isn’t good so I hold it to a single, and I can’t tell you how many times the next guy rolls over or something and we get a double play versus maybe giving up a double or a triple and now we have to pitch differently. I’ve definitely spoken to (Anderson) Miller a lot about how aggressive we could be in any given situation and he’s usually my safety net because he’s like, “Maybe now isn’t the time,” or I can hear him yelling when I’m running, “Go get it!” or “Do whatever you want here I’m gonna be right behind you.” That’s always a really good feeling to have knowing the chemistry I have with my corner guys is good or if I’m playing a corner then I can kind of check it all out from a different perspective.”

Q: You’re spreading the ball over the entire field better than at any time in your career. Is that something you’ve focused on, and do you feel like it’s lead to general offensive improvement?

Nick: “I can give all the credit to spreading the ball to Nunez, our hitting coach who’s really worked with me on staying inside each baseball and hitting them the right way. So the balls I hit the other way aren’t slicing foul and the balls I’m pulling now aren’t hooking. They’re starting to be hit with authority and it’s a good feeling knowing that although what I was doing in my early work or in the cages might not have been paying off two months ago but it’s showing me the preparation for now is starting to pay big dividends. Teams used to play me pull on the infield which was weird to me. And the outfield would play me oppo, but now that I’m able to spread the ball around things are somewhat back to normal and I’m able to find holes in the defense. My biggest thought process is hit everything up the middle and being fooled out front I can hit the right center gap, being a little late I can hit the left center gap and let my legs work from there. I feel like my confidence is at a place I’ve never had it before which has helped me 100%.”

I have to tell ya, this might be the best (formal) interview I’ve ever had with a player. Listening to Nick’s answers you can almost see the changes he’s made without having to actually watch him play. It sounds to me like a kid that has figured out some big things in his game that are going to pay huge dividends for him, much like Brett Phillips recently with AAA Omaha.

Speaking of AAA Omaha, I think there’s a really good chance that Nick Heath finds his way there in the next week or so after the Royals trade Billy Hamilton. Brett Phillips will probably make his way to Kansas City to fill that role and split time with Bubba Starling, and Nick Heath will take over in CF for Omaha.

One thing that Nick and I talked about that I’d like to mention is the pressure that players feel for any number of reasons. It’s easy to forget that these prospects are just kids with human emotions like the rest of us. Nick Heath will be eligible for the Rule 5 Draft this offseason. That can put an enormous amount of pressure on a kid to perform, immediately, to try to crack his teams’ 40-man roster. Nick mentioned that, coming off of his stellar performance in the Arizona Fall League, he admittedly put a little too much pressure on himself to come out of the gates and perform. Once he was able to relax a little bit and play the game the way he knows how, he said he felt immediately more comfortable.

Heath has been absolutely dynamic for NWA over the last couple of months. He’s a bit old for the level (25) and still strikes out more than you’d like for a non-power hitter, but he won’t need to hit much to be valuable anyway. If all Heath does is get on base 30-31% of the time, even without hitting much, and plays CF the way he’s capable, he could start in CF for Kansas City for a while, even if that’s in a platoon role.