When you talk about defensive floors, MJ Melendez is among the elite of the elite. Melendez plays the most premium of the defensive positions and he plays it with the best of ’em. Melendez is currently throwing out 54.8% of potential base stealers and has something like 9-11 pickoffs to go with them. The kids is wildly gifted behind home plate, he calls a great game for his age from what I hear, and he projects as a plus-plus defender behind home plate moving forward. With his raw power, he’ll carry through the minor leagues.

Coming into the 2019 season, we had MJ Melendez ranked as our #1 overall prospect, ever so slightly ahead of Brady Singer. I personally still have Melendez ranked higher than this on my list, but the reason he was our #1 prospect was due to his offensive potential. In the South Atlantic League in 2018, Melendez set a record by hitting 19 home runs as a 19-year old. He hit 54 XBH with a 128 wRC+, but only had a .251 BA and struck out in 30.3% of his PA. It was a bit of an up and down year, but the potential that was in his bat left us craving for more.

Now it’s July, Melendez has 275 PA in the Carolina League, and he’s hitting .172 with a 37.8% K% and 71 wRC+. That’s the bad news. The good news is that Melendez couldn’t come from a better background. You couldn’t pick a better kid to have to go through some struggles. Melendez’ dad is the head coach for the baseball team at FIU, Melendez is a fantastic kid with his head on his shoulders, and seems to be making the right strides at the plate. Melendez’ swing may not allow him to be a plus hitter in the future, and he’ll probably always come with some strike outs, but the power is legit. It’s been a very up and down year for Melendez, but he’s been trending up of late. If he can get on base 32-33% of the time, hit 25 HR, and play Gold Glove defense, he’s going to start for the Royals for a very long time. 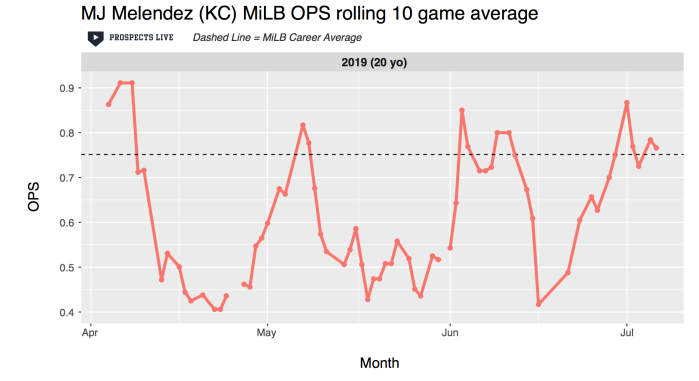 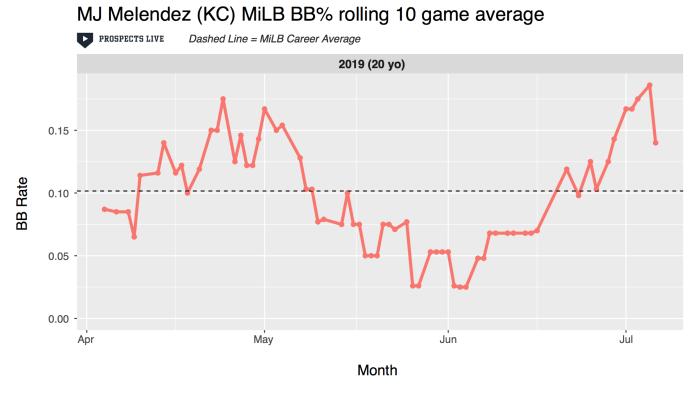 Brady Singer is the single most polished/advanced arm in the Kansas City Royals farm system. He has shown great command of his fastball that can run 92-94 mph with good arm-side movement. His breaking ball has been a little slurvy at times, showing flashes of plus and flashes of “meh.” His changeup, when it’s on, shows glimpses of being a 60-grade offering, but it is wildly inconsistent and has only really been an option vs LHP on occasion.

Singer has been hit pretty hard at times at AA, and the strikeouts are down as well. Some of this was to be expected. The jump from A-ball to AA is widely thought of as being the toughest of any jump in the minor leagues. Singer dominated A-ball thanks to his command, pitchability, and raw stuff, but his transition to AA is where we’re going to see significant growth from Singer. Either Singer will learn to outmatch advanced hitters, or he’ll have to make improvements to his stuff. At present, his breaking ball is not a good big league offering, and neither is his changeup. That doesn’t mean they can’t be eventually though. Pitchers develop at different paces and in different ways. If you’re looking for a guy capable of making the changes necessary to be a big league starter, Brady Singer is your guy.

Khalil Lee is probably the second or third most talented prospect in this entire system. He has a ton of raw power from the left side of the plate. He’s already stolen 35 bases in 78 games this year. He’s walking in nearly 13% of his PA and at AA and he just turned 21. He’s got 7 outfield assists this year and he’s logged at least 50 innings at each outfield position. The kid might be knocking down the door for a promotion to AAA Omaha, and once he’s there, he’s one or two good hot streaks away from The Show…

Lee was mighty impressive last season in Wilmington, posting 136 wRC+ before being promoted to AA. He missed the end of the regular season with a minor injury, so the Royals sent him to the Arizona Fall League where he was…uh…disappointing. So disappointing in fact that I wasn’t even sure what to do with Lee in our preseason rankings. I wound up ranking him 5th right behind Brady Singer, but I wound up putting him back to #4 for my mid-season list. 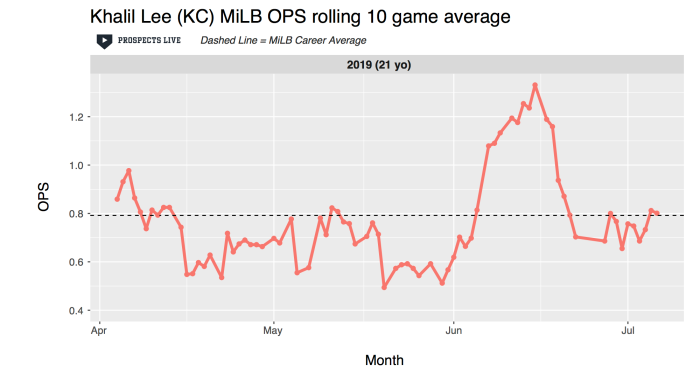 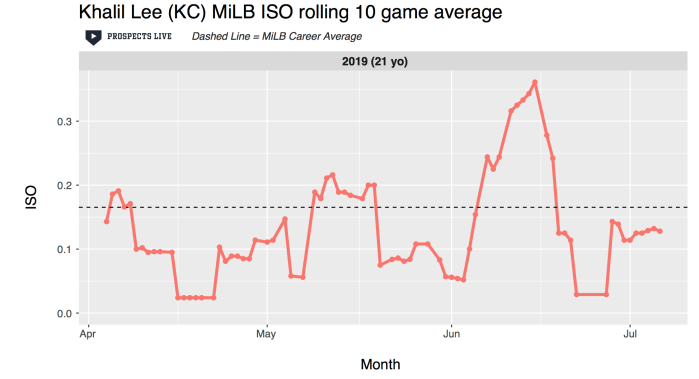 Khalil Lee reminds me a lot of Alex Gordon. Streaky hit tool, good raw power, may not access it all the time because of his streaky hit tool, good wheels but not elite, walks a ton, strikes out more than you’d like, great defense in the outfield and a great arm. If Khalil Lee wound up being another Alex Gordon, averaging around 4-5 fWAR over a five-year stretch in the prime of his career, I don’t think anyone would complain one bit. Lee certainly has the talent, if he can put it all together, the Royals have a really, really good one on their hands.

I almost rated Jackson Kowar as my #1 overall Royals prospect. I really wanted to. I wound up going with Bobby Witt Jr., as did everyone else on our staff, but I wanted so badly to put Kowar #1.

If I could build myself a pitching prospect, it would closely resemble Kowar. Tall, lanky, great arm action, electric fastball, wicked changeup, big breaking ball. Kowar’s pure ability on the mound is wildly impressive. In his first start at AA earlier this summer, Kowar registered his first strikeout with a 99 mph fastball. Combined with what many call a “Bugs Bunny” changeup, and you have the makings of a big league pitcher in some capacity.

The curveball is what will determine Kowar’s future. Is it going to be good enough for Kowar to become the ace of a rotation? Will it fail to develop and turn Kowar into more of a #3-4? Can Kowar command his fastball well enough for the curveball to be just average? No pitching prospect is perfect. Some argue that there is no such thing as a pitching prospect (TINSTAAPP), but Kowar’s weaknesses are pretty slim compared to most.

If I was going to do a top 100 MLB prospect ranking, I’d probably have Kowar in my top 50, between 40 and 50. Glancing quickly at MLB Pipeline’s current top 100 list, I’d probably nestle Kowar somewhere between Matthew Liberatore at #46 and Corbin Martin at #48 (they have Singer at #45 and I have Kowar > Singer FWIW). If Kowar ever figures out how to make his curveball just an average big league offering, he’s probably a top 10 RHP prospect in all of baseball. Even without it, a mid to upper-90’s fastball and his changeup will be good enough to carve out a role in the big leagues.

Kowar CH/FB sequence. His 96 plays like 99 with how filthy his changeup is. Changeup doesn’t even have to be a strike to be effective. pic.twitter.com/Z6DTCRhNyi