Juan Carlos Negret came to the Kansas City farm system after the Atlanta Braves were forced to release a number of free agents for cheating the international free agency process. Since coming to Kansas City, Negret is hitting just .204/.281/.395/.677 with 17 home runs, 20 doubles, a triple, a 30.2% K%, a 7.2% BB%, and 81 wRC+ in 430 PA. Negret was a pretty big get in the 2017 offseason for KC, but hasn’t performed nearly to expectation yet.

Negret has all kinds of talent. A potentially plus-arm in the outfield, good speed, great power, he just hasn’t been able to put the bat on the ball enough for it all to matter yet. Negret’s style of play kind of reminds me of Jorge Soler. He obviously hasn’t been nearly that good, but in terms of style, there are some similarities there.

One report I’ve heard is that Negret has seen fastballs really well, but hasn’t been able to handle a breaking ball to save his life, evidenced by a K% over 36% in Lexington this year. Should Negret ever figure out how to fix some of his offensive woes, he’s a legitimate prospect with serious power potential. Otherwise, he may not make it to AA.

Another day, another #Moonshot for Juan Carlos Negret (@JuanCar19195252). His 6th of the year was a solo shot, no-doubter to left center!💪💪💪 #RoyalHighlights@RoyalsFarm @RoyalsPD pic.twitter.com/43jAGz68Nm

Holden Capps has been absolutely dominant since being drafted by KC in 2017. The lefty out of Central Oklahoma has struck out just about everyone he faced across four levels, and was an integral part of the 2018 South Atlantic League Champion Lexington Legends bullpen. In my opinion, Capps is long overdue for a promotion to AA. Since the beginning of the 2018 season, Capps has an ERA of 2.58 with a 10.04 K/9 and 1.57 BB/9 in 97.2 IP. Capps is one of the better relief prospects in this system, and while he’s too old for the system, he can’t promote himself to AA. Would surely think he’ll be there by season’s end.

I’ve never been as high on Garabito as others, but there are those that believe he could provide value in the back end of a big league rotation some day. Garabito arrived on the prospect scene with Lexington in 2017, when he posted a 2.81 with 72 K in 77 IP with just 19 BB. Garabito followed that up with 142.1 IP in Wilmington last year to the tune of a 3.16 ERA.

The biggest thing I’ve been waiting for with Garabito is for his K/BB ratio to begin to climb. Strikeouts aren’t the end-all be-all for a pitching prospect, and while Garabito doesn’t strike out a ton of batters, he walks far too many. He’s also seen an uptick in home runs since moving away from a super friendly pitchers park in Wilmington. With lacking stuff, Garabito’s command is going to have to be plus-plus to make it, and it hasn’t been that quite yet at AA.

I was really excited about Rubendy Jaquez coming into 2019. He has absolutely raked at every level he’s been at since joining the organization in 2016. Here is a bit of how Jaquez has performed since 2016:

Jaquez kept getting better through the end of 2018, and was starting to flash some potential pop as a 19-year old in 2018. In 2019 though, Jaquez has seen his K% soar above 25% (previous career high was 17.8%) and has been BABIP’d quite a bit as well (.273). The good news is however, that Jaquez has started to hit the ball with more authority of late: 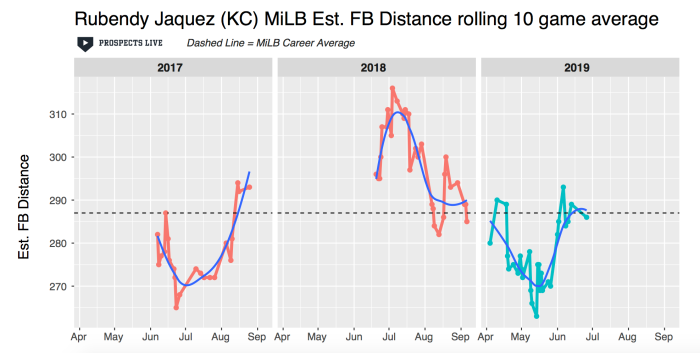 Jaquez’ overall toolset will have to improve for his prospect status to reach legitimacy, but he’s got an interesting profile that’s definitely worth keeping an eye on.

Rave didn’t hit quite as well as a junior this past spring, but some of that can be attributed to being the known man in the lineup. Michael Gigliotti had a really similar situation coming out of Lipscomb in 2017. Raked as a sophomore, performed well in the Cape, didn’t quite live up to standards as a junior. Despite the ACL tear in 2018, Gigs has been a great success in KC’s system so far. I sort of expect Rave will be similar, despite the slow start (on a .214 BABIP I should note), but he’s not quite as safe as Gigs due to the lack of elite defensive profile in CF. In any case, the Royals have a really interesting prospect on their hands here.