Massey comes to KC from the University of Illinois, where he posted an .863 OPS with 5 HR and 14 doubles as a junior. Massey didn’t excel in the Cape Cod League in 2018, and he was never an elite hitter at Illinois, but he comes with some projection. Much like Kyle Isbel, Massey isn’t a huge kid but he’s fairly strong and his swing suggests there could be some power to be tapped into from the left side of the plate.

Delvin Capellan is my favorite under-the-radar prospect in this entire system. I personally had Capellan quite a bit higher than the rest of my voting peers, but I can understand why he’d be this low as well. So far we have less than 130 innings to go off of in his professional career. What we know about Capellan so far is that he throws a lot of strikes (career walk rate of 1.21 BB/9), he strikes out his far share of batters (career 9.00 BB/9), and doesn’t really give up runs (2.79 career ERA).

We probably won’t know quite enough about Capellan to get super excited about him until he gets to Lexington, but I’m probably too excited already. His coaches in Burlington have raved about him and he’s shown us no reasons to not be excited thus far.

Rough night for Delvin Capellan, but caught arguably his best AB here. Sequenced FB-CH-CH-CB (last 3 shown in vid) for swinging K. FB up to 93 for me. #Royals pic.twitter.com/JBnB6m2GjE

Tyler Zuber is one of the better relief prospects in this system. He reminds some in the Royals org of Greg Holland, being an undersized right-handed reliever without an elite fastball but throws a plus breaking ball and has great pitchability. Zuber, along with guys like Gavin, Capps, Marte, Ratliff, Staumont, Zimmer, Newberry, Speier, and Lovelady, give the future of the Kansas City bullpen a bright look.

Nate Eaton has been one of our favorite fringe prospects in the system for the last 8-9 months, despite our accidentally leaving him off of our original top 75 list this preseason.  Eaton came out of the gates last summer in his professional debut on fire. He posted a 153 wRC+ with Idaho Falls over his first 303 PA with 5 HR and 19 SB. The speed/power combo that Eaton was showing off were just enough to keep him on prospect radars, but the HR power has been kind of zapped so far in A-ball. But…

Nathan Eaton makes something of an appearance in this rather interesting article. https://t.co/SLsf4fzxjc pic.twitter.com/KuCpuCtKF4

Eaton’s speed/power combo is still prolific enough to register among some of Minor League Baseball’s most intriguing. Eaton has played a ton of infield as well as occasionally in CF for Lexington this year, but I wonder if he wouldn’t be best suited in the outfield long-term. I would never suggest looking at errors too closely, but Eaton has made a ton of them on the infield. His feet also look a bit choppy at times, but Eaton looks comfortable enough in the outfield and his arm should have no problem playing out there. In any case, the ability to play CF, 3B, and 2B, with his offensive profile, does wonders for Eaton’s prospect status.

DJ Burt is a prototypical Royals prospect. Elite speed, great defensive abilities at multiple positions, action baseball. He hits for little-to-no power, though his raw pop and line drive ability suggest he could hit 20-25 doubles at some point in the future. Burt has always been a little bit of a slow developer. He took a full season to get going in Wilmington. He didn’t necessarily dominate at Lexington. He didn’t get going in rookie ball until his second go round. Burt hasn’t gotten going at AA Northwest Arkansas yet either, but I have faith that he will at some point. He makes decent enough contact, runs like hell, defends his ass off, and that’ll play. If the contact skills every become anything above average, he’s a very useful utility man in the big leagues.

ICYMI: @Royals prospect DJ Burt has a CANNON for a right arm 😳 pic.twitter.com/Tv1EhI9YfF

DJ Burt is enjoying his time in @MelbourneAces colours! The @Royals prospect drove in a run thanks to a double! #ABL pic.twitter.com/GgO04M4ZbP

I’m not gonna spend much time talking about Bubba Starling. He’s a man that needs no introduction. Elite defense, plus runner, plus arm, and he’s finally making contact on a regular basis. Fans have been clamoring for his promotion for what seems like months. You’ve never seen Bubba hit like this, and you want the $7M man in the big leagues. Once Bubba starts hitting the ball with more authority, or once Billy Hamilton gets traded, you’ll see him. We’ve been waiting eight years for this. The time has finally come.

Conner Greene was advertised as a big fastball with little-to-no command when he came to KC this past offseason. Since the beginning of the 2016 minor league season, Greene has walked 5.04 batters per 9 IP, and struck out just 6.64. He’s regained some of his strikeout ability this year with NWA, and his walks were down significantly early on, but what ever adjustments he made to throw more strikes has also gotten him knocked around a bit as well, though he’s recovered in that department a bit of late. 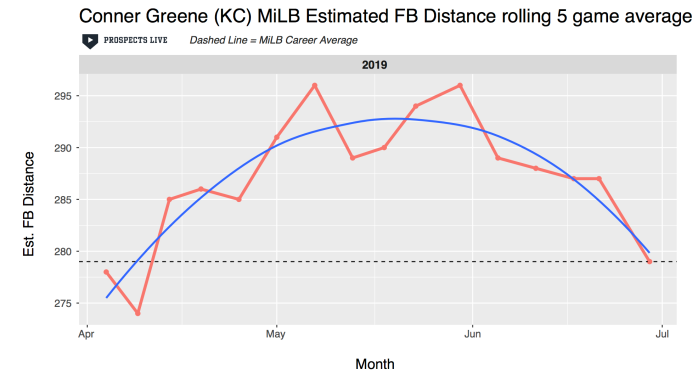 I’d really prefer to see Greene in a short-stint relief role. I really think he has potential as a back-end type, or even as an opener given his starting experience (see: Staumont, Zimmer). For now though, the Royals are going to let him start it seems.

Jeison Guzman is a roller coaster of emotions. He’s wildly athletic. He shows an enormous amount of potential. He plays incredible even if sometimes erratic defense. We keep sitting around waiting for him to hit and he just doesn’t. We sit around clinging to the former bonus baby waiting for something to happen, and sometimes we get glimpses of, “There it is,” and then it goes away again.

The good news regarding Jeison Guzman is all listed above. He’s still just 20 years old, wildly athletic, enormously gifted, and shows flashes of brilliance. If he can ever figure out some consistency, he’s legit. He is a legitimate top 10 talent in this organization and I pray that he finds some consistency in his offensive approach. Here’s an example of what I mean by inconsistency:

Look at that mess. If we can hold those peaks, we’re in business. The valleys will keep Guzman in A-ball for the time being. For now, it’s a waiting game.

Blake Perkins has been on an absolute tear since coming back to Wilmington after a brief stint in Northwest Arkansas. 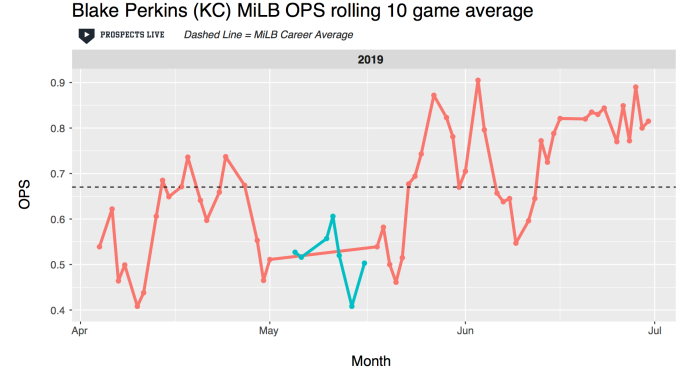 His season wRC+ at Wilmington is up to 117 and his OBP is up to .373. Perkins’ M.O. is gettin on base, creating havoc on the base paths, and playing ELITE defense in the outfield. Any kind of offensive output that would register above average makes Perkins an extremely valuable prospect. His defense and ability to run give him a safe floor, and Perkins has always shown a great eye at the plate. He didn’t start switch hitting until he was a professional, so it could be a slow burning development process for Perkins, but if he hits even a little, he’s a fourth outfielder on a big league team.

Video of OF Blake Perkins, just traded to #Royals in a three prospect return for Herrera. Impressive speed/defense in CF w/ bat that needs to develop in order to get everyday ABs. High floor guy given the center-diamond ability.#RaisedRoyal

Ofreidy Gomez has never been my favorite pitching prospect in this system, but he’s growing on me pretty quickly. Gomez hasn’t been elite by any means in his time with NWA this season, but he’s been close to the best of his professional career for most of the season: 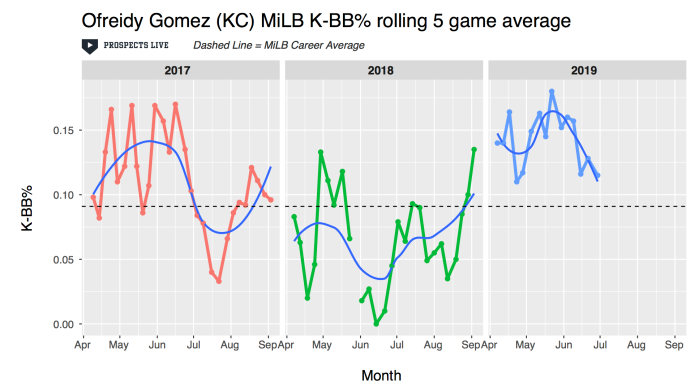 I am all the way here for this. Gomez has almost reached an average estimated fly ball distance similar to what he was posting in the Carolina League and his K-BB% are right around his career bests as well. Gomez’ stuff isn’t elite, but he’s got a chance to throw three slightly above average pitches with a decent fastball, good changeup, and good breaking ball. I don’t think his ceiling is higher than that of a #4-5 starter, but if he keeps this up, I’ll buy him as a big league starter. I love the improvements he’s made in 2019, but I want to see if he can continue these trends through August.