When the Lexington Legends beat the Columbia Fireflies on June 16th, they clinched the Southern Division for the first half of the season and guaranteed themselves a playoff spot.

Yes, we are excited about this. You can’t see me right now, but I’m jumping up and down and screaming like an imbecile, this very moment.

To be frank, this is not the 2018 roster; last year, we had a load of Top-30 prospects in the lineup. They were expected to perform as they did. Maybe this year’s team doesn’t have that same glitz as 2018’s, but they’ve shown themselves to be a fun team to watch. Believe me when I say, this first-half finish is no fluke. We haven’t seen the best, just yet.

Much of the reason for this first-place finish is due to the outstanding pitching we’ve had. That much is certain. However, there are hitters on this team that are slowly gaining momentum, and at least one or two who have struggled so far, but are likely to come around in the second half.

For those of you who aren’t quite familiar with this year’s model, here’s Part One of a closer look at the Legends roster, and the players who have guided this team to the playoffs.

The 4th-round pick out of Lipscomb University in the 2017 Draft, Gigliotti had only 70 minor-league games under his belt when he went down with a season-ending knee injury in 2018 after just six games in Lexington. Also, 42 of those games were in rookie-level Burlington, so he had only 28 games in Low-A ball at the time of his injury. To me, this offsets slightly the concern that he is old for the level (23 years old; 1.5 years older than the average SAL player). 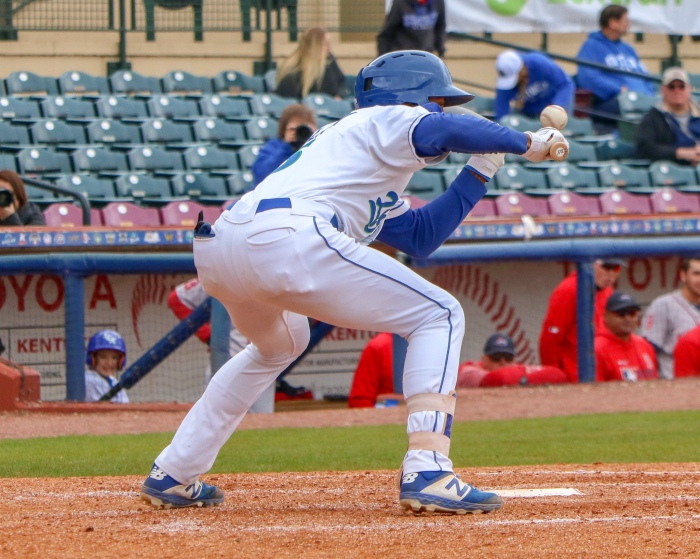 He gets out of the box quickly, and as far as I’ve seen, he’s lost nothing in the way of speed or mobility from that knee surgery in 2018. He sprays the ball around the field (pull pct 35.1%, center pct 25.3%, oppo pct 39.7%), which is a departure from the small-sample-size numbers he’s put up before this season. He can drive it well into the gap or occasionally leg out a double on a short liner over the head of an infielder.

He picks his spots well when it comes to taking the extra base, and often goes first to third with ease. He’s aggressive when the situation calls for it, so from time to time he’ll get himself into scoring position at a key moment.

Gigliotti gets to most everything in center. He chases deep into the gaps very well, and he typically can go back on a deep fly with ease. He takes good routes to the ball, and covers lots of ground. Again, the knee injury/surgery does not seem to have affected him in any noticeable way.

Gigliotti typically appears laid back on the field, often smiling. This level of pro ball does not seem to be much of a challenge for him, but it was a good idea to send him to Lexington just to get him accustomed to it.

I don’t see any reason that Gigliotti would struggle in High-A. There is almost always an adjustment period, of course, for most any player, but I doubt it would be a long one for him. I would definitely keep an eye on his progress, if you’re tracking Royals prospects.