Jon Heasley had a career high 10 strikeouts on Sunday for Lexington against the Asheville Tourists.  A lot of questions have been asked after his strong start to the season.  He is currently 4-1 in 9 appearances, the last 4 coming as starts.  The Royals have been careful about his pitch counts limiting him in those starts to 77, 71, 81, and 81.  The last two he has really made strides with a career high 8 Ks against Kannapolis and resetting that career high to 10 Ks in this one.

In this game, Heasley only allowed two base runners.  It happened to be the same guy twice, Danny Edgeworth.  Edgeworth took him deep in his first at bat after getting into a hitters count at 2-0 and worked a walk in his second.  He didn’t get a third against Heasley.

In a game where a pitcher gives up 1 hit, walks 1, only throws 5 total pitches out of the stretch, and finishes with 10 Ks, you’d think it was absolute domination but I was disappointed to get a different feel to this game.  Heasley struggled with his command and threw just 58.0 percent of his pitches for strikes.  He fell behind 12 of the 20 batters he faced.  Heasley only worked into five 1-1 counts winning just two of those putting the count in his favor at 1-2.  In fact, he worked into seven 2-0 counts equating to 35 percent of batters faced.  Those aren’t good odds going forward.  This means, of the 20 batters he faced, 12 were in what are known as hitters counts.  As Heasley moves forward, we don’t want to see those numbers.

Heasley had a little bit of a reputation at Oklahoma State as a guy who got into trouble but was able to work out of it.  This start fits right into those perceptions including the brilliance of being able to get out of the trouble he found himself in.  As a whole, this start was more about Heasley being a better pitcher than the Asheville lineup’s ability to hit.

I’m not trying to rain on his parade or take any credit away from Heasley, I am just pointing out that the game results don’t necessarily add up to the on paper dominance of his box score. 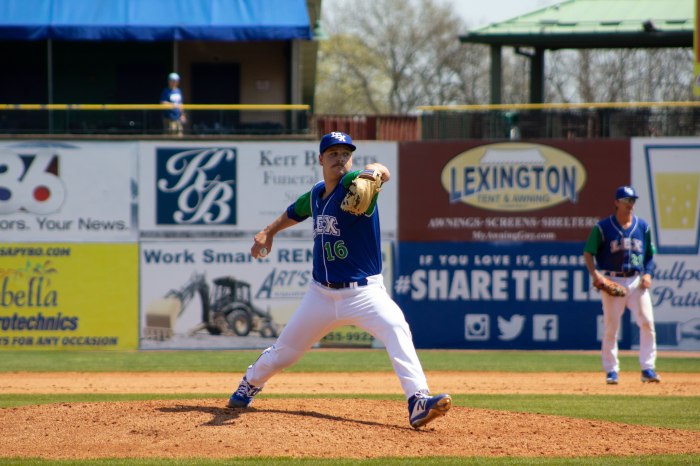 Stuff.  Heasley’s fastball over powered the Asheville lineup in all but one at bat.  That was the aforementioned home run on a 2-0 fastball to Edgeworth.  Heasley worked 90-94 in this outing with most of his pitches being around the 92 mark.

His curve was effective because he didn’t throw many of them.  It had glove side break into LHHs and away from RHHs.  He only threw seven of them total but he ended up with 4 strikeouts on the pitch.  He needs to continue to develop the pitch and find ways to use it more.

The change up was also effective keeping hitters off balance.  I would grade it ahead of the curve in this game.  Again, he only threw it seven times though and he had the batter off balance on six of the seven.  Like his curve, I think he needs to use this more.

Approach.  Healsey was fastball reliant.  Of the 20 hitters he faced, all of them started with a fastball.  Fourteen of those first pitches were fastballs on the inner part of the plate to both LHHs and RHHs.  There was one point where he started nine consecutive hitters with a fastball inside.  Freddy Fermin was his catcher so it’s worth watching to see how Fermin calls other pitchers games to see if this is Heasley’s game plan or more of his catcher calling the game.

After Edgworth took Heasley deep on a 2-0 fastball in his first at bat, Heasley worked into the same count in their second matchup.  This time, Heasley threw a 2-0 change up that ended up being in the dirt.  It was the only bad change up he threw in this game.

Heasley struck out 10 batters in this game.  Four of those strikeouts came on the curve.  Two of those strikeouts came on the change up including one on a full count.  The other four strikeouts were on fastballs.  He did try to throw the two-seamer back to the inside corner against a LHH on an 0-2 pitch early in the game.  He did the same thing with a change up on the 3-2 pitch against a LHH as well.  It seems to be that he is trying to bring the ball back to the inside corner against LHHs with two strikes.

I know that Heasley’s fastball was overpowering to this Asheville lineup, but I would like to see more of his off speed as he moves forward.  If he is going to be a starter long term, he is going to have to use those pitches more.  I will say that his movement in this game was extremely good and kept hitters from squaring him up.

Mechanics.  Heasley used a hybrid stance when he was in the wind up on the extreme third base side of the rubber.  He starts with his left foot in front and slightly turned toward the third base dugout.  His hands started at his waist and stayed there throughout the delivery process.  He lifted this knee to waist level and slightly above.  There were a few times I thought he got overly rotational losing his line to the plate.  Most of the time that was because he opened up early.  His mechanics in the windup were solid in this game.

I only saw five pitches out of the stretch which should tell you how dominate his fastball was.  All five of those featured a full leg lift but the runner on base wasn’t someone considered a threat to steal bases.  Heasley stayed on the third base side of the rubber and didn’t pick off one time.

Overall.  This game was not as dominate as the stat line says.  Now, again, I’m not trying to take away from his dominance in this game because he was very dominate.  I’m trying to point out he didn’t do a good job getting into pitchers counts and controlling the game.  Heasley pitched out of trouble within at bats many times.  Going forward, I’d like to see him dot up the zone better.  He missed a lot of locations with his fastball but still managed to get easy outs.  The only hard hit ball was the home run in the second inning.

This was only Heasley’s fourth start on the season so it’s worth watching to see how he continues to adjust to this role.

Ten strikeouts and you were only in a pitchers count 40 percent of the time?  Good grief.  It’s scary to think of what he will be able to do when he refines his first pitch strikes.  This start gives me a lot of hope for Heasley going forward because it’s hard to set a career high in strikeouts when you don’t have your best stuff.  Imagine what he will do when he does have his best stuff and he is working ahead in 65 to 70 percent of counts.

Photos taken from Our Sports Central online site and they gave credit only to the Lexington Legends.