It’s well known that the Kansas City Royals made pitching their top priority in the 2018 draft; selecting pitchers with their top 5 picks, and 14 of their first 20.

The early payoff has been an overwhelming net positive for an organization that was desperately in need of some young arm talent.

The majority of these players are in Lexington, where they are establishing a pitching staff that has oscillated between nasty and flat-out dominant to begin the season.

The 3 first round selections began 2019 with Wilmington and have helped power the Blue Rocks to an 18-12 start.

Tracking down who is pitching where and how they’re progressing can be an arduous task for the well intentioned fan. Our goal here is to give you a comprehensive look at the pitchers from the 2018 draft class in one location. 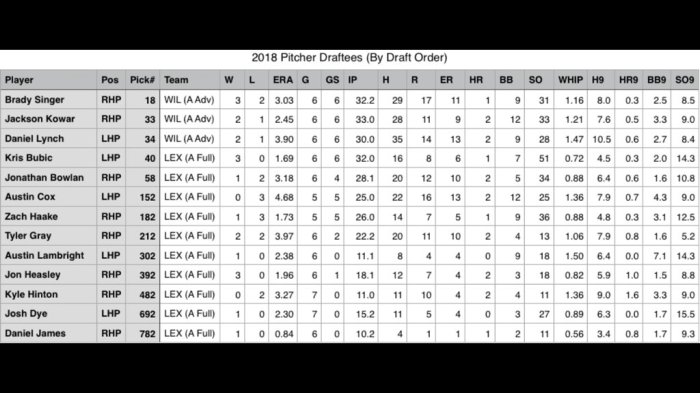 Kris Bubic’s 51 strikeouts in 32 IP have him at 14.3 SO/9. The 21-year old lefty is known for his dominant changeup, pounding the strike zone, and a unique throwing motion -think Kershaw with a little less hitch. Bubic’s numbers across the board have been impressive and everyone should keeping a close eye on his advancement.

Jonathan Bowlan’s 0.88 WHIP. Having started 4 games and provided some long relief in 2 others, Bowlan has been effective in whatever role he’s been placed in. The 22-year old righty’s best pitch is a fastball that can live in the mid-90s, but his slider has loads of potential as he continues to develop it.

Zach Haake’s 1.73 ERA. A gleaming example of the uselessness of pitcher Wins and Losses, the 22-year old righty has opposing hitters flailing without much success so far this season. In a recent interview with Royals’ beat writer Rustin Dodd, J.J. Picollo compared Haake’s fastball to Noah Syndergaard and Brandon Maurer. Whichever it may be, he’s got it working.

Check back every Monday as we will continue to update this resource with statistics, roster movement and information.