If you watched the final telecast of the Royals spring training game to conclusion, you already know that Frank Schwindel caught Kyle Zimmer and Kevin Lenik for one inning each. And he didn’t look half bad either. 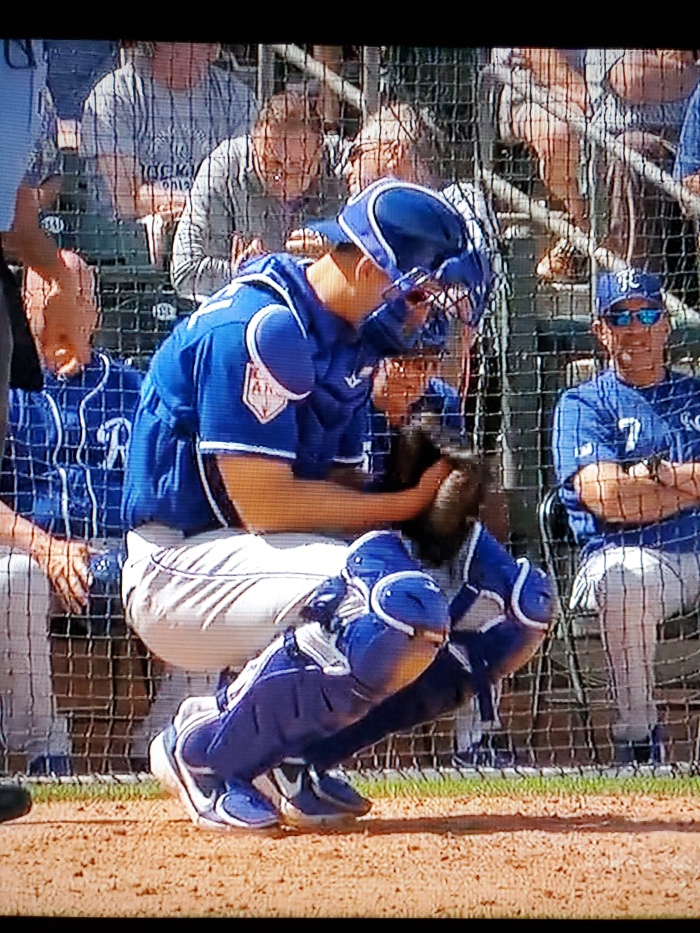 This isn’t the first time Schwindel has been behind the plate. Frank has caught 69 minor league games equating to 572.0 innings behind the dish. However, Schwindel hasn’t caught in a game since May 7, 2015 when he caught the second game of a doubleheader at Potomac. Yender Camaro started the game throwing 6.0 innings of 1-run ball before Nick Green finished it earning the save. Casey Janssen threw one inning for Potomac in a rehab start.

And since you are wondering, Schwindel has thrown out 39 percent of runners trying to steal.

Schwindel looked comfortable behind the plate and actually seemed to have some pretty soft hands. His setup was a little high, but he did a decent job moving in and out. And Schwindel had no problems catching the curve. Even when it bounced in the dirt.

Then, on Zimmer’s tenth pitch, it happened. The baserunner broke for second. Zimmer’s fastball tailed up and in on the batter but Schwindel turned it around and nailed the runner by several feet. I had it between a 1.81 and 1.86 POP. I rewound the video to run my stopwatch on it several times. That’s an impressive POP time for a guy, especially a guy who hasn’t caught in a game for almost four years.

Yes, Schwindel was excited pointing to DJ Burt who made the tag and pumping his fist in excitement. The bench and coaching staff seemed just as excited celebrating with him and joking about Schwindel’s cannon between innings.

ICYMI: Frank Schwindel throws out a runner at second base while catching in a game for the first time since 2015. #Royals pic.twitter.com/lsuvGWfYaG

So to review, Schwindel handled Zimmer’s 97-mph heat, threw out a runner, stuck a few borderline pitches for strikes, and had no problems with the curve. I think it’s safe to say Frank Schwindel could easily be the emergency catcher on this team right now. After a little bit of time working on it, who knows what he could become. Yes, there is work to be done. But for a guy whose bat is forcing the coaching staff to take a second look this spring, it is great he is doing well auditioning for multiple positions including the toughest on the field. Catching can only help Schwindel on his journey to the big leagues.

One thought on “Schwindel Catches Zimmer”