The Royals don’t usually make a huge splash when they sign international free agents.  Just go back to July 2nd and look at the Baseball America Top 50 International Free Agent list and you won’t see the Royals mentioned but one time.  Even so, the Royals have had some success signing impact players.  Here is a quick look at four international free agent starting pitchers who could make a major league impact one day.  (Note: Elvis Luciano was on this list when I started working on this.  I expect he will come back to us at some point and you can put him on this list.)

Yefri Del Rosario
Some of us feel that Del Rosario will be a possible top 100 prospect in all of baseball by the end of the 2019 season.  Del Rosario will be just 19-years-old this season and has already shown well in Lexington.  Our guess is that he move quickly once he gets his season started due to his 93-94 mph fastball and plus curve.  He has the best curve in this group.  Del Rosario continued to get better as the year went on.  There is a chance he could be the rare teenage pitcher in the Texas League by the end of the year.  The Royals could start him in Wilmington if they choose with the wave of collegiate pitchers from 2018 MLB Draft.  They could also send him to extended spring training or start him in Lexington.  We’ll find out as spring training gets started.  I want you to imagine a rotation of Brady Singer (ranked #2), Daniel Lynch (3), Jackson Kowar (6), Yefri Del Rosario (10), and our next arm, Carlos Hernandez (15).

Carlos Hernandez
The Royals started throwing around Hernandez’s name before the start of last year’s minor league season.  JJ Picollo told me last January about Hernandez saying he is a guy you need to pay attention to because he is going to be a top 20 guy for us by the end of the year.  And Hernandez was.  Hernandez is 6’4″ in a pitchers body, doesn’t walk people, and posted a 9.3 K/9 rate.  He has also works 93-94 and can reach back for more when needed with a potentially plus breaking ball. 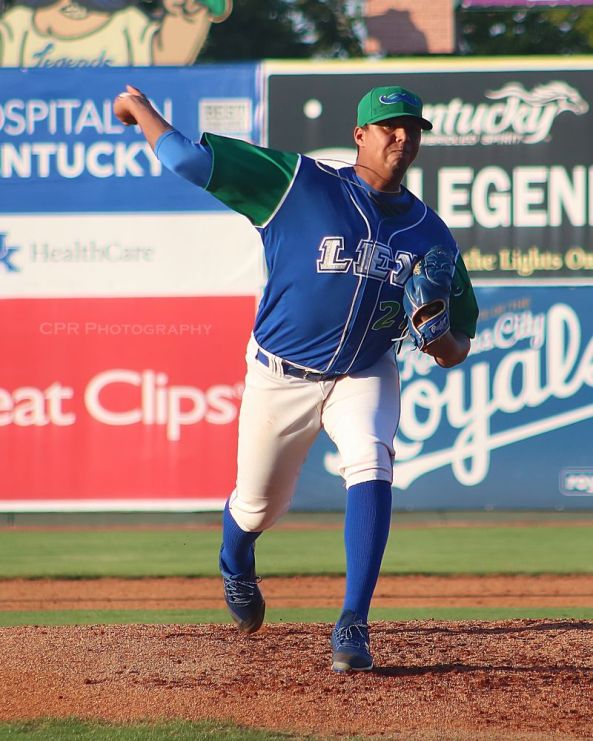 Carlos Hernandez delivers a pitch for the Legends.  Photo taken by Doc Riddle.

Arnaldo Hernandez
The Royals thought highly enough of Hernandez to basically skip double-A (he made only three career starts at NWA) and add him to their 40-man roster this off season.  I voted Hernandez really high in my individual list of prospects because I saw him make one of those three career double-A starts and he was electric.  I wrote about his stuff here.  Hernandez will more than likely spend the year at Omaha and could be up in September or possibly before.  Hernandez was working 92-96 in this start but can run it up to 98.  He has a strong change up and a sharp curve.

Arnaldo Hernandez delivers a fastball inside to a RHH.  You can see the arm side movement as Xavier Hernandez works to stick the pitch.  Sorry about my shaky video work.

Gerson Garabito
Garabito isn’t a guy we’ve talked a lot about.  He dropped in our prospect rankings even though he had a 3.16 ERA over 142.1 innings in Lexington.  Garabito’s walk rate climbed last season to 4.62 BB/9 and his strikeout rate dropped to 7.33 K/9.  Those rates should rebound this season as he starts at NWA.  Garabito threw 62.1 more innings in 2018 than he did in 2019.  Garabito did finish the season strong posting a 1.52 ERA in his last 53.1 innings striking out 46 and walking 24.  Opponents hit just .202 against him in that time frame.  By finishing so strong, you can say that Garabito learned how to deal with the level and found success.  The Royals feel he is ready for the next challenge and will put him in the 2019 rotation at NWA. 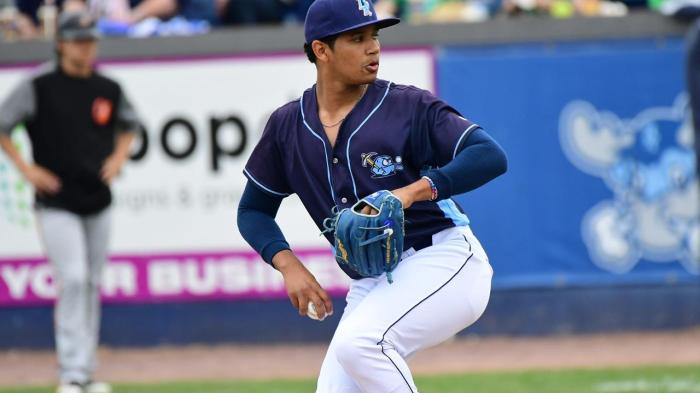 Garabito delivers a pitch for the Blue Rocks.  Photo taken by Brad Glazier.

One thought on “Four Starting Pitchers to Watch in 2019”