Ofreidy Gomez surprised some people when he moved into the 30th spot of the MLB Pipeline prospect list for the Royals last year. We ranked him as the Royals 38th best prospect going into the 2019 season.  The young Dominican signed for $115,000 back in 2012 and has slowly risen through the ranks.  Gomez spent three years in the DSL before finally being promoted stateside in 2016.  Gomez spent the season in Burlington where he threw 55.1 innings and put up a 5.20 ERA.  He moved to Lexington in 2017 spending the full season there more than doubling his innings to 137.1 with a 5.18 ERA and 12 losses leading the South Atlantic League.  Some lost hope while others believed in the fastball velocity and curve.  The Royals continued to move Gomez up the ladder sending him to Wilmington last year where things seemed to click for him as a 23-year-old. 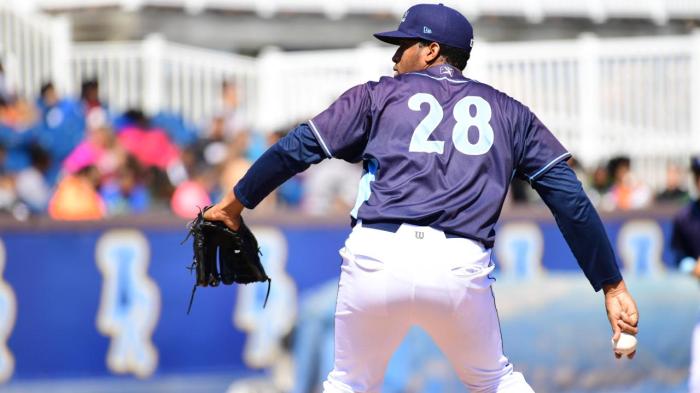 Gomez may be considered one of those guys who is a late bloomer.  He has always thrown hard and been able to spin the ball, but he is still learning a feel for how to pitch and a change up.  His control has not been great but he has an arm that people believe in.

Gomez worked 93-97 last season.  The fastball has life and good arm side run.  However, he doesn’t keep a good downhill trajectory on his fastball often and his arm is often late leaving the fastball up in the zone.  A few mechanical tweaks could help him get this more under control.  If Gomez is able to give his arm more time to work, he would have better control and downhill life on his fastball.  When I watched film of him, there were times in games that the fastball was nearly unhittable because it had life, arm side run, and was at the knees away from a RHH bumping mid-90s.  That pitch in itself is tough to deal with.

Not giving the arm time to work is a common problem with a lot of pitchers.  In order to give the arm time to get through its full motion, you have to create more time in the delivery.  This is hard to do for some guys because they have poor body control or can’t control their throwing tempo.  It’s honestly something I work on with almost every single pitcher I coach at some point in our relationship.  The easiest way to create more time in the delivery is to alter the timing a pitcher goes to the plate before he actually starts going to the plate.  This is absolutely something I would suggest to Gomez and I know the Royals have because one of the things they believe in is keeping your head over your back hip/the rubber until you are ready to deliver the pitch.  This is according to conversations with pitching coach Steve Luebber and several of their pitchers.

If Gomez gets his fastball locked in, he will be one tough guy to hit.  There are days his curve is a plus pitch.  It comes in hard and disappears for hitters.  It’s not quite 12-6 but close.  There is horizontal movement to the glove side.

For his change up, Gomez uses a split grip.  This gives the change a lot of sinking action.  He has had issues with control because of the aforementioned mechanical problems, which in turn leaves the change up with less sink making it a hittable offering.

Breaking down the numbers for Gomez was interesting.  You see, last year he had a career changing 75.1% of runners left on base.  This is one reason he cut nearly 2.00 full points off his ERA.  In 2017, he left only 63.2% of runners on base.  Even though this is only 12% fewer runners left on base, he cut runs allowed by 30%.  Either something finally clicked for him, or he got lucky.  Of course it’s probably a combination of both.  His FIP was 4.67 and his xFIP was 4.54 compared to his 3.40 ERA.  This shows that there is probably some regression coming for him as his ERA has trended with his FIP and xFIP the previous two years.  Combine that with his 4.07 BB/9 rate from 2018 and you would say he got lucky more than he improved.  Of course his results over time is the biggest component to this theory.

Over three years in the States and his pull/middle/oppo rates were nearly identical.  That’s very unusual.  Hitters pull about 44% of the time, stay up the middle 26% of the time, and go oppo around 29% of the time.

From watching film, I thought Gomez was fairly easy to run on.  He needs to improve his ability to limit jumps by opposing base runners.  His pick off moves weren’t bad, but he is readable.

In order to be successful as a starter in the long term, Gomez is going to have to cut his BB/9 which will allow him to cut his WHIP which was 1.44 in 2018.  Again, I believe that will all trend in a positive direction when he figures out how to give his arm more time in the delivery.  Gomez will start the season in Northwest Arkansas so I’ll be able to get some first hand knowledge by watching him.

With his mid-90s fastball and sometimes plus curve, he has a future in the big league bull pen.  If he can fix the issues I lined out, I think he can be a starter but he has to have that third pitch consistently working for him.  The Royals front office is watching him closely.  Gomez is still young, but he has a ways to go before he is a finished product.  The Royals can give him time to develop.  Gomez is the kind of arm that could explode up the charts this season or could be right back in NWA next season.  I think we all agree when I say I wish him success this season in NWA.

Photo taken from MiLB.com and taken by Brad Glazier.