The Royals have three players who played in their system last year playing in the Australian Baseball League this off season for the Melbourne Aces.  Outfielder Rudy Martin, second baseman DJ Burt, and catcher Allan de San Miguel.  They Aces were eliminated from the playoffs yesterday so it’s time to look at how their individual seasons went.

It was reported that the Royals have bought the rights to RHP Brandon Marklund on Tuesday.  This doesn’t mean they have a deal in place for Marklund to pitch in the Royals system next year, it means they own the rights to sign him.  I would expect a deal to get done soon.  Marklund went undrafted out of Bryan College in Tennessee.  He went to Australia in an effort to get the attention of MLB teams and sign a contract.  It sounds as though it will work out for the Canadian.  Marklund pitched for the Auckland Tuatara and left the team last week for workouts in the United States. 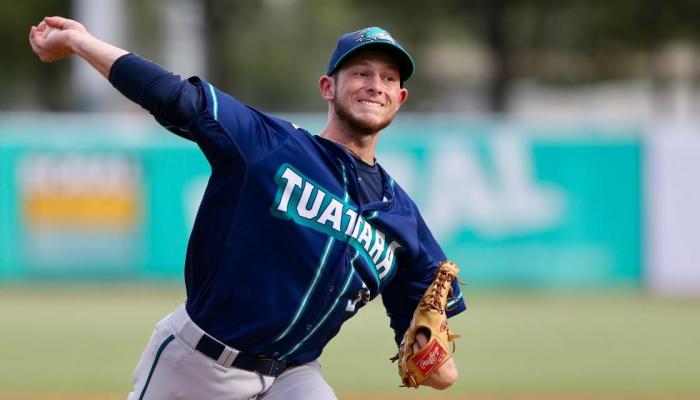 Brandon Marklund had a solid season in Australia. Photo credited to Photosport.

DJ Burt – .338/.437/.466, 7 doubles, 2 triples, 3 HR, 26 R, 18 RBI, 21 BB, 19 K, 18-25 SB
Burt spent most of the season hitting in the three hole and playing second base for the Aces.  Burt he did lead off and hit in the two hole a few times over the course of the 39 game season.  Burt had a solid season finishing with an 8-game hitting streak before going 0-3 in the wild card game.  Burt did a great job getting on base not reaching base in only a handful of games.  This is something that the Royals hope he can do in NWA as he has earned his promotion to double-A.

Rudy Martin – .119/.255/.185, 3 doubles, 2 HR, 17 R, 4 RBI, 22 BB, 43 K, 15-19 SB
Martin played in 39 games for the Aces hitting leadoff for most of the season.  He dropped down to the 8 and 9 spot a few times.  Martin is a speed player who did not have a very good Australian season.  The good news is that even though he didn’t hit, he found a way to have an on base percentage .140 points above his batting average and still stole bases.  These numbers will have to improve for him to be successful going forward.  He will probably start the season in Wilmington.

One thought on “Looking Down Under”