Overview. The Naturals lost five 1-run games this week. And a sixth game that was a 2-run game. They won one game on the week. The week included a five game losing streak and being swept by the loathsome Cardinals. The weekly record was not good but every game they played could have gone either way so you can take the moral victory and move onto this week. The Naturals finish their series with Tulsa today before hosting Springfield for four and going to Little Rock for four.
The week featured seven transactions which leaves the roster a little uneven. Thirty players are listed with three on the DL and one on the restricted list. That leaves one player on the active roster that needs to be moved somehow. Perhaps the Naturals have already done that but the transaction hasn’t been posted by the Texas League yet.
Elier Hernandez is now leading the Naturals in batting average after going 11-25 over the course of the week raising his average 65 points to .289. Nicky Lopez is only 5-24 over the last week but also is continuing to walk raising his season total to 15 versus 9 strikeouts. Lopez now owns a 37.8% on base percentage. Samir Duenez has slumped going 3-24 over the week but leads the team with 3 home runs. Donnie Dewees has also struggled going 2-22 over the week. Anderson Miller is 8-23 over the week and is playing much better all around. Erick Mejia went 5-28. Luis Villegas had a good week going 5-10 with a home run before Nick Dini moved to NWA and took the remainder of those catcher at bats. Alex Liddi and Corey Toups have been splitting time at third. Liddi lost his 6 game hitting streak yesterday dating back to last week. Alfredo Escalera has been the odd man out as Jecksson Flores is getting some ABs in LF. It’s also worth noting that Mejia and Lopez flipped yesterday with Lopez at second and Mejia at shortstop.

Naturals starting pitchers are averaging 4.2 innings per start. They had a string of mostly good starts this week highlighted by Foster Griffin’s 7.0, 0 R, 4 H, 1 BB, and 9 K outing. This was easily his best start and the team’s best start of the year to this date. Scott Blewett and Zack Lovvorn also added quality starts this week going at least 6.0 innings with 3 or fewer runs allowed. Glenn Sparkman missed a quality start by 1 out when he struck out 9 over 5.2 innings with only 2 runs. Griffin and Lovvorn both missed a second quality start by 1 out as well when they both went 5.2 innings. Emilio Ogando had the only poor start this week when he gave up 3 in just 2.1 innings. The Naturals seem to be extending their starters to about 95 pitches now and will soon work up and over 100.
It’s also worth noting that Corey Ray has had two good outings in relief since coming back to the team after initially struggling to adapt to the relief pitcher roles. 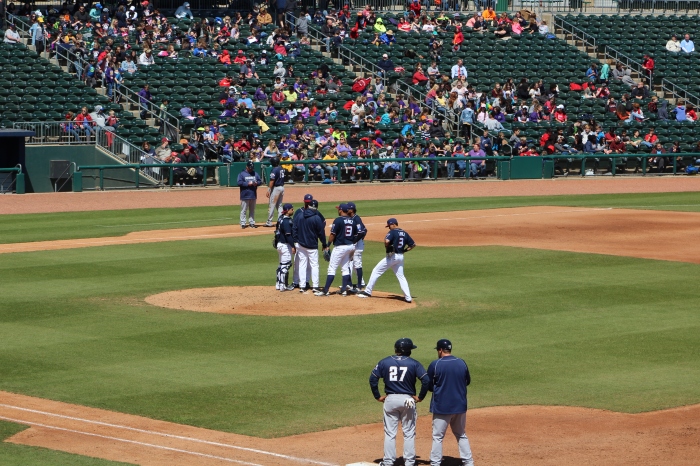 A visit on the mound.

One thought on “NWA Naturals Week in Review: April 23-29”