The Naturals where 1-3 on the week before winning back to back games to end up .500. You can read some recaps of a few of their games below. The Naturals hit the road for the first time this season on Thursday afternoon and were able to enjoy an off day on Wednesday. They will finish the road trip on Tuesday and have another Wednesday off before hosting Tulsa for two and going to Tulsa for two.

The Naturals are hitting. 240 as a team this season with an on base percentage of 31.4%. They are tied for the league lead with 108 strikeouts in 10 games. That’s an average of almost 11 K’s per game. They are averaging 8 hits a game and 2.5 extra base hits a game. They are also 2nd in the league stealing 13 bases so far.

Samir Duenez leads the team in most offensive categories.

Samir Duenez leads the team in AB, R, H, doubles, TB, SLG, and OPS. Duenez is tied for the team lead in triples and home runs while hitting .333. Nicky Lopez leads the team with 8 BBs and 3 SB. Luis Villegas is leading the team with a .353 batting average. Lopez, Duenez, Villegas, and Elier Hernandez are all hitting over .300 for the last week. Corey Toups, Alfredo Escalera, Anderson Miller, and Nathan Esposito are currently ice cold.

As a pitching staff the Naturals have a league worst 5.22 ERA. I would say this is because they have had so many bullpen innings already this season. Naturals starters have been working around 80 pitches so far averaging 13.4 outs per game. This means they are basically going 4.1 innings per start. Or not even half the game. Foster Griffin has had the best start for the starting pitchers while Jason Adam and Yunior
Marte have done the best for the relief corp.

Foster Griffin currently leads the team and is second in the Texas League with a 1.00 ERA. He should get two starts this week. Griffin is starting the 11:05 AM game on Monday and should start the Saturday night game at Tulsa. Zach Lovvorn will be the other guy who gets two starts this week as he matches up with former Royal Matt Strahm (sad face with a tear) Tuesday and with Tulsa Sunday.

The Naturals are in position to win their first series of the season after taking the first game of three at San Antonio Sunday. A series win against first place Tulsa would go a long way toward catapulting the Naturals into first place by the end of the week.

Foster Griffin with a change up grip.

Monday. The Naturals came into the week down 1 game to none in their home series versus San Antonio. They dropped the middle game 5-2 and lost the series to start the week. Glenn Sparkman went 4.2 IP giving up 3 ERs on 7 hits allowed, no BBs, and 2 K’s. At the same time Jake Junis was twirling his masterpiece in the bigs, Jesse Scholtens was spinning a masterpiece against the Naturals. Nicky Lopez broke up the up the no-no with a leadoff triple in the 4th before 3 consecutive K’s ended the scoring chance. Jason Adam pitched a solid 2.1 innings with no free passes and 2 Ks.

Tuesday. The Naturals won the travel day behind 3.0 perfect innings from their bullpen and a solid 6.0 innings from Foster Griffin. Griffin allowed 3 leadoff hits to start the first, second, and third innings. Each runner was erased on a groundball double play. The game remained 0-0 until the bottom of the 4th when Donnie Dewees squeaked a groundball through the 5/6 hole to score Samir Duenez. Duenez was on base because he forced Elier Hernandez out at second and didn’t hit the ball hard enough to be a double play. Duenez was able to put himself in scoring position by stealing second. He is an underrated runner.

Alex Liddi made it a 2-0 game when he hit a ball off the back wall of the left field bullpen in the bottom of the 7th. And it quickly became 4-0 when Corey Toups doubled right.

Griffin gave the Naturals a start they desperately needed ending a 4 game losing streak. Not only did he end the losing streak, he did it against Cal Quantrill who is one of the Padres top arms. And they will match up again on Monday, April 16. The bullpen was the best it has been all season behind the efforts of Pedro Fernandez, Franco Terrero, and Jake Newberry.

The Naturals hit the road after their win Tuesday afternoon before an off day Wednesday. They opened up a 3 game series at Whataburger Field with Corpus Christi in Texas on Thursday. This series did not go well. In fact, the Naturals have not won a series yet this year. 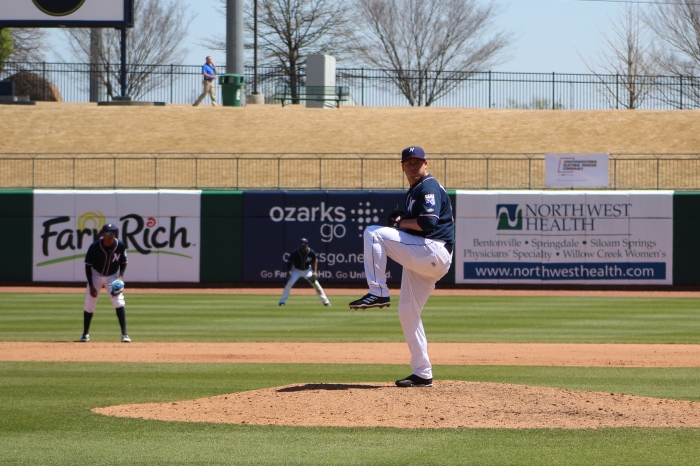 Jake Newberry delivers a pitch for the Naturals.

Thursday. Zach Lovvorn started the game for the Naturals with 2.0 perfect innings. In the third he suddenly started battling his control walking 3 in the inning after allowing a leadoff hit. So basically, once Lovvorn got into the stretch, he walked 3 batters before getting out of the inning. Lovvorn struggled a little in the 4th before being taken out at 79 pitches. Yunior Marte came in and struck out 5 in 2.1 innings. The only runner he allowed was a 2 out walk in the 5th. However, Marte came back to strike the next 4 hitters out. Corey Ray had an ice cold week and got the loss in this one retiring only 1 batter and allowing 3 hits, 1 BB, and 2 runs. Sam Selman came in and bailed him out of the inning facing 2 batters who both struck out. Jason Adam continued his comeback striking out the side while allowing 2 hits and a run.

Nicky Lopez, Donnie Dewees, and Luis Villegas all had a multi hit game for the Naturals Thursday. Alfredo Escalera got the 2 RBI. The Naturals left 12 runners on base and struck out 10 times as a team. Those numbers do not generally lead to wins in professional baseball.

Friday. The Hooks dropped the Naturals 8-1 scoring 5 runs in the bottom of the 8th to blow the game wide open. The 7 run loss is the worst loss in terms of run differential the Naturals have had this season. Scott Blewett gave the Naturals a good start in this one going 5.2 innings with zero earned runs allowed. He did give up an unearned run, 5 hits, 2 BBs, and had 4 Ks. Pedro Fernandez got tagged with the loss when Franco Terrero gave up a home run allowing his inherited runner to score.

The Naturals continued to get hits even if they aren’t scoring big runs. Dewees and Lopez both had multi hit games while 5 other Naturals had hits. In this game, the Naturals left 18 runners on base and struck out 10 more times.

Saturday. The Naturals salvaged the last game of the series and avoided the sweep in Corpus Christi by winning the final game of the series decisively, 11-6. Emilio Ogando strung together 5.0 solid innings to earn his first win of the season. Jake Kalish and Corey Ray struggled out of the pen before Yunior Marte came in with 2.1 scoreless innings.

Luis Villegas continued his hot start to the season hitting a 2 run home run. Duenez went 3-4 with a triple, 3 runs scored, and a walk. Right behind him in the order, Elier Hernandez went 4-5 with a double and 2 runs scored. Jecksson Flores had two hits and drove in 4 runs.

Sunday. The Naturals made it two wins in a row opening the San Antonio series with a 3-2 win. This was the first game Salvador Perez played with the Naturals on his rehab assignment and hit a solo home run in his second at bat. Glenn Sparkman, the other half of the battery for the Naturals, got credit for the win in 5.0 innings striking out 6, allowing 3 hits, zero BBs, and 1 run. Jason Adam threw 2.0 hitless innings in relief striking out 1 and walking 1. Terrero had a solid 8th inning and came back out to start the 9th. After retiring the first batter, Terrero gave up a double followed by a run scoring single. At that point Mike Rojas went to closer Jake Newberry who got a strike out and a fly out to center field for his first save of 2018.

Corey Toups was the only Natural with a multi hit game. Lopez, Dewees, Duenez, Anderson Miller, and Flores also had hits. 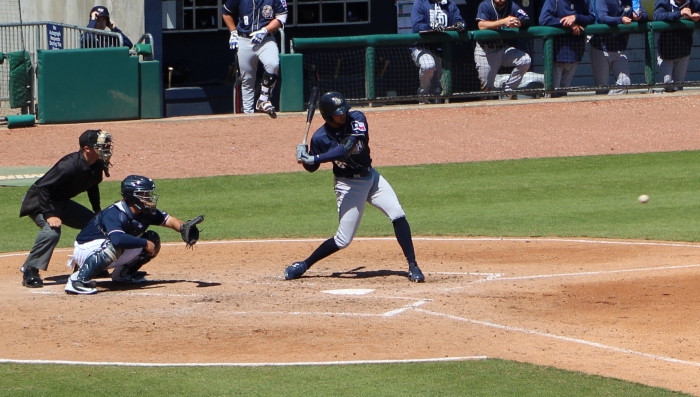 One thought on “NWA Naturals Week in Review: April 9-15”