It is that time again! As the baseball season finally reaches its conclusion, we do some reflection and projection on prospects in the Royals organization. This post kicks off the second edition of Royals Farm Report’s Prospect Rankings, as we came out with our first top 30 list in July. We’ve expanded our horizons on these rankings, deciding to come out with a top 100 list. This post will cover 100-91 in our rankings. Enjoy!

Our method for determining out top 100 Royals prospects came from an aggregate of three separate top 100 lists. These lists were compiled by three member of our writing staff, Patrick Brennan, Alex Duvall, and Drew Osborne.

Isaiah Henry fits the mold of what the Royals look for a lot of times in the draft. Raw talent, speed, athleticism. That’s exactly what they bought into taking Isaiah Henry in the 14th round of this year’s draft out of North Shore High School in Texas. A stud in the field, at the plate, and on the mound (throws mid-90s) in high school, Henry originally had a commitment to play at Alvin Community College, put the Royals convinced him to kick off his professional career (14th round slot value at about $125,000).

Henry might’ve been too overmatched in his jump from high school to pro ball. He struggled severely with the bat (74 wRC+, 35.6% K%). He did show some positives though, impressing in centerfield and on the base paths. He also showed how to take a walk (15.3 BB% 2nd on team).

Henry has very little arm extension in his swing along with a downwards swing path, resulting in many ground balls. Also shows some moving parts in swing, possibly pertaining to the many strikeouts

Henry looks like a project that will take some time. Best case scenario is he fully transitions his athleticism to the diamond, maybe developing some power along the way.

Atencio is on here because he’s a catcher and he put together a respectable season at the plate (101 wRC+). A lot of this offensive production from the Venezuelan 21 year oldlooked like it came from a .367 BABIP though, as Atencio had never posted a BABIP higher than .265.

Atencio did look like he made improvements with his approach. His 25.8 LD% ranked in the top tenth of the Appalachian League, minimum 100 plate appearances.

The times I watched Atencio behind the dish in Burlington, he held some nice receiving skills and showed off some decent pop time to second base. He threw out of 10 of 30 attempted base stealers this year.

From what I’ve heard, Yender Caramo is a pitcher  that the Royals organization is pretty bullish on. The 26 year old did leave an impression last March in Spring Training, allowing only six hits and one run in 7.1 innings.

Caramo looks like an arm that could find a home in a big league bullpen. A plus fastball with elite control (1.2 BB/9 in his career) can always play. Perplexingly though, his plus offerings haven’t translated into strikeouts (4.9 K/9 in his career). He throws the ball where he wants though, inducing a high amount of weak ground balls.

Looking back at Sam Selman’s stats, I forgot how dominate of a year he had. The former second round pick put together his best season as a reliever by far, striking out 12.9 batters per nine and allowing 4.5 (!) hits per nine.

The former Vanderbilt product features an above-average fastball and curve. Since converting to a reliever, Selman has had his inconsistencies. A large part of this is due to command problems (5.5 BB/9 in his career).

He’s got a inconsistent delivery that involves some deception.

The lefty could very well be in the plans for the Royals next year. He’ll get a look in Spring Training and probably start the year in Omaha, but don’t be surprised if he’s pitching in the big league bullpen by the second half.

It has been up and down with the bat for Alfredo Escalera ever since he was selected by the Royals in the 2012 draft as a 17 year old (youngest player to ever be selected in the draft). His at bats used to be rollercoasters (think Raul Mondesi) when he was in the lower minors, but since then he has shown some improvements in pitch judgement (still below-average).

I love the LD/FB approach from Escalera, sometimes flashing some serious pop. He still hasn’t been able to fully harness those raw tools though (career high for home runs is nine.)

His defensive skills are nothing to rave about (has a decent arm, decent speed). He played the majority of his games in center earlier in his career, but has since been playing in the corners more frequently. That’s where I’d expect him to end up.

Andres Sotillet got his career started off right, taking home DSL Royals Pitcher of the Year honors in 2016 after posting 1.52 ERA in 65 innings. After carving up the DSL, Sotillet was sent to Arizona to kick off his 2017 campaign. The results were fine there also, as he posted a 2.28 ERA in 27.2 innings, striking out 26. Sotillet got to move higher upon the ladder, pitching in Burlington and Idaho Falls to finish out the year.

Sotillet has flashed superb control early in his career (1.6 BB/9), along with an ability to generate ground balls and pop ups.

Hernandez skipped the lowest ranks of the minors, starting his career in Burlington this year at age 20. It was a season of good and bad for him. He had times where he looked in control of the game, pounding the zone and mixing his offspeed stuff. Then there were other times in which he seemed totally lost on the mound.

After dealing with injuries at Stanford, the Royals took a chance on Gabe Cramer as a reliever, signing him as an undrafted free agent in 2015. After struggling in his rookie season of pro ball, Cramer has showed the traits of a shutdown reliever, owning a whopping 13.0 K/9 thus far in his career. 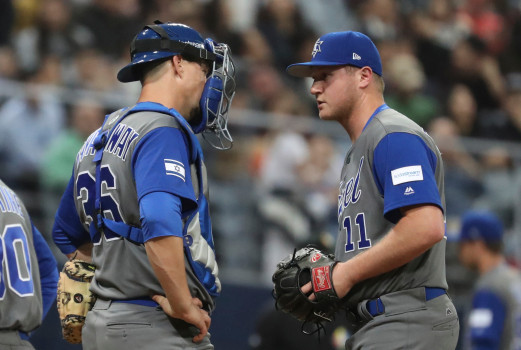 Cramer dealt with multiple injuries in 2017, spending most of the year on the DL and only pitched in 13.2 innings (all with Wilmington). In that small sample size, Cramer had the best stretch of his career, striking out 27 and only walking two.

Cramer features a fastball that can reach the upper-90s, along with a decent curveball and changeup. If he can stay healthy this year and continue to work his strikeout stuff, look for him to climb up the rankings considerably. All a matter of health.

On the surface, Lara looked like he had a rough year. The statline isn’t as gloomy as it seems though, considering he pitched in the Pioneer League. It gets better when you dig further too, seeing that Lara led the Pioneer League in SwStr% by a far distance.

I expect the numbers to seriously improve sooner or later. There is a lot to like about Lara. Smooth delivery with deception, fastball that can touch upper-90s, swing and miss stuff. Lara could turn into a legit prospect once he smoothens out. Keep an eye on him next year.

Dudek absolutely destroyed the ball after signing as undrafted free agent with Royals, hitting .346/.469/.625 in 30 games with Idaho Falls Chukars. Problem is….. that was 2016. The switched flipped with Dudek in his transition to full-season ball. He struggled with the bat mightily, hitting a meniscal .204/.296/.366 in 77 games with Lexington.

Dudek has some power to both fields (MLBfarm.com)

This is a big year coming up for Dudek. He’ll need to convince the organization that he can move up the minor league ladder and keep his career going.